Even today, I am overwhelmed by the difficulty in creating a video game. Since the first years I learned how to program it seemed like a relatively easy task. Ok. I could draw a teapot on the screen. I could play sounds and music. It was ridiculously easy to see what keys was the user pressing, to read a file from disk and what not.

It’s not about the lines of code

So why is making a game more difficult than the sum of all these? This is something I found out the hard way! The relationship between the size of a project and its difficulty is not linear. Games today are usually large projects with a magnitude of tens to hundreds thousands lines of code. Thus, creating an average game today presents a challenge that requires taking a very different approach than someone is used to when dealing with small scale projects.

When a project grows, its difficulty grows not with the lines of code, but with the number of interactions that exist between the various parts of the code. These interactions must be taken into account all the time. Let us define a fully unstructured project as one in which every part of the code is able to interact with every other part. In that case these interactions are not proportional to the project’s size, but to its square.

Someone with background on algorithms can easily see where this is going… When a project is not structured, it becomes increasingly difficult to manage, until it eventually reaches a point where any addition or change becomes prohibitively troublesome.

Fortunately there exists a solution, but it requires a somehow different mindset than the one we are used to when working with small projects.

Apologizing in advance to all the people who have devoted their lives to software development and have read and written dozens of books on the subject, I am just going to say here what in my opinion is most important with respect to our context:

High level design is all about separating a large project into logical parts which are mostly independent from each other. Ideally this way we can treat every part (or module) as a small program. The keyword here is “independent”, and represents the change in mindset I was talking about earlier.

When working on a small project, we are most concerned about writing the least amount of code possible  in order to achieve our goal. As a result we focus more on reusability and we try to reuse pieces of code regardless of where in the code they exist. In essence there is no distinction between parts of code. Everything belongs to a single entity, our program, which we can manage as long as it stays small.

On the other hand, when we design something bigger, our first concern is different. We must focus on making sure that the project ever gets completed. And to achieve this we have to find a way to fight its tendency to become harder as it grows. We saw that this tendency springs from the interactions between code rather than the size of the code itself.

Preparing for a large project

So how do we deal with these interactions? Its simple: Forbid them! This is what high level design is all about. Forbiding interactions (or dependencies) between modules. The first step is to divide our code to logical parts our program will consist of. For example: graphics, sound, math, input, game logic.

We then document which modules will be allowed to depend on each other. For instance it must be obvious that graphics must not depend on sound. But there are more subtle cases. Does the sound module need to depend on math? Modern games feature 3d sound with various sound sources placed in different positions in the game world. Setting their position and velocity using a vector class might seem like an attractive idea:

How elegant is that. However is that enough to support the addition of one more dependency? The answer is no. Every dependency between modules must justify its existence beyond any doubt. We could have easily avoided the dependency like this:

Maybe not as appealing as the former, but its not so much more troublesome either, and its enough to get rid of a dependency which is our very first priority here.

There will certainly be situations where its difficult to decide if a dependency is justified or not. I have a rule of thumb for these: “When in doubt, forbid!“, and here is why:

In order to give a large project a hope of ever being completed, we must divide it into small entities and forbid as many dependencies between them as possible.

I intended to add more here about my own frightening experiences, in order to show how troublesome can underestimating dependencies be, but this post already exceeded the size of a “tip”. So I will be postponing the terror for my next tip about unit testing which is somewhat related anyway.

One thought on “Gamedev tip #2 : Divide and conquer” 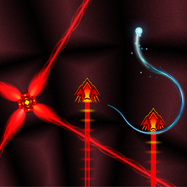 Cyclos: Revolution
Get it now on Google Play